Maps by Classification - This page contains a listing of maps based on their classifications rather than their locales.

These maps reflect the currect atlases used on Duris.  The surface is comprised of many continents:  the Goodie continent, Evil continent, Icecrag, Shaboath, Venan'trut, Dragonnia, the Jade Empire, Undead continent, Boyard Island, Khonami-Khan, and Evermeet.  While Evermeet is technically it's own subcontinent (noticeable due to it's large amount of forests), it is connected to the goodie continent and one can walk easily between the two.


The Mountain Peaks of Shanatar are controlled from Alatorin, and can be found in the northwestern mountains of Icecrag.  While not big, it is a dangerous area for the unexperienced. 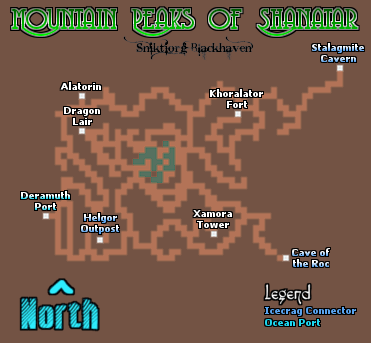 
The Nautical map is useful to sailors as it gives the relative position of the various surface continents in relation to the degrees of a compass.  While not an accurate depiction of Duris as a world, it is highly effective in helping would-be mariners to cross the whale-road.

UD - Passage to Underdark from Moregeeth

Transparent Towers (off the coast of GC near Flann) - abbreviated TT

Twin Towers - abbreviated tt
Add a photo to this gallery

Temple of the Sun (ToS)

Trakkia Mountains
Add a photo to this gallery

Depths of Duris (Alatorin)
Add a photo to this gallery

Ny'neth Stronghold (continued)
Add a photo to this gallery

The Realm of Barovia (Bloodstone)

The Realm of Barovia (continued, Bloodstone)

Domain of Lost Souls (domain)
Add a photo to this gallery

Myloch Vale (not sure where)
Add a photo to this gallery
Retrieved from "https://duris.fandom.com/wiki/Maps_by_Region?oldid=5336"
Community content is available under CC-BY-SA unless otherwise noted.